Crude oil moved over 2.5% higher on Wednesday following the US Energy Information Administration’s (EIA) weekly report showing a larger-than-expected inventory draw in gasoline and distillate products. Gasoline stocks fell 13.624 million barrels versus an expected 2.3 million barrel draw for the week ending February 26 according to the DailyFX Economic Calendar. That draw is the largest since the early 1990s.

The enormous draw in fuel products was a result of the massive storm system that barreled through Texas and other portions of the southern United States in late February. Record breaking cold temperatures put a huge hit on refinery capacity, causing crude oil stockpiles to swell by over 21 million barrels. Refinery production will ramp back up, but it may take weeks to make repairs and get operations up and running to pre-storm levels.

Looking ahead, OPEC+ will meet this week to discuss possible production increases amid rising oil prices as the global economy continues to ramp up. However, the cartel along with its allies may decide to hold steady on the current production cuts. That said, the oil ministers’ decision will be key to crude oil’s direction.

Crude oil found support at its 20-day Simple Moving Average (SMA) after breaking lower from the late February swing high. The recently overtaken 23.6% Fibonacci retracement level may offer support on a downside move. A break below the Fib level would bring the 20-day SMA back into focus, however. The Relative Strength Index (RSI) is trending moderately higher towards the overbought 70 level. 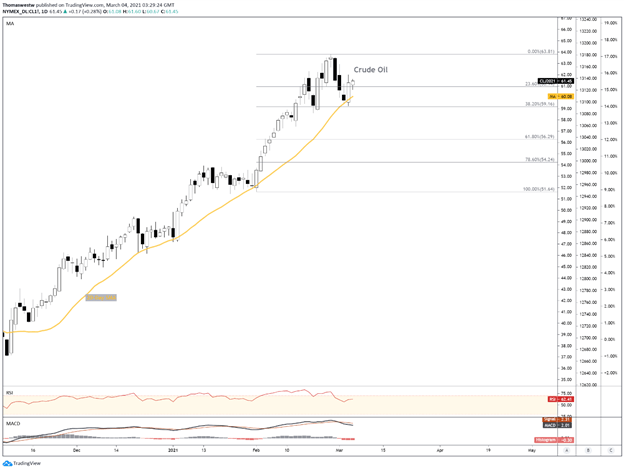