EUR/USD: Is the correction over? Without Brexit or stimulus deals, further falls are likely

The last trading Friday of 2020 is here – and with it some profit-taking. That is one of the reasons for the retreat in markets and the bounce in the safe-haven dollar. Many traders are going on a Christmas holiday at the end of the day.

There are additional reasons for the setback, after several days of a Santa Rally.

First, hopes for an imminent US fiscal stimulus deal have failed to materialize on Thursday. While both Democrat and Republican leaders have said publically that they are making progress, several details still need to be ironed out.

Expectations that an accord would be reached on Friday – a related deadline to keep the government running – are also fading. While politicians have vowed to work over the weekend if needed, investors would like to see an agreement before making further moves.

The second deal that is still pending is Brexit. Chief EU Negotiator Michel Barnier said that there are large obstacles and the path to a deal remains narrow. He echoes his British counterpart David Frost, who stated on Thursday that talks are blocked.

GBP/USD has dropped some 100 pips from the highs and is dragging the euro down. Talks continue in Brussels and breakthrough could boost both currencies, but that may have to wait for the weekend.

Optimism comes from the vaccine front – an advisory panel at the US Food and Drugs Administration (FDA) gave the nod to Moderna’s coronavirus immunization. Final approval may come later in the day. The EU announced that it would begin administering the Pfizer/Moderna jabs from December 27.

The vaccine could not come sooner – the US reported another day with over 3,000 covid deaths and European countries are seeing new surges in statistics, just before the Christmas holidays. One of these cases is French President Emmanuel Macron.

The recent winter wave is weighing on the US economy with jobless claims jumping to 885,000 last week – the second consecutive increase. Investors were able to weather Wednesday’s disappointing retail sales figures for November, but the accumulation of downbeat data is taking its toll.

All in all, the balance shifts toward the downside after substantial gains earlier in the week. Only a considerable breakthrough in one or two sets of talks could provide fresh impetus. 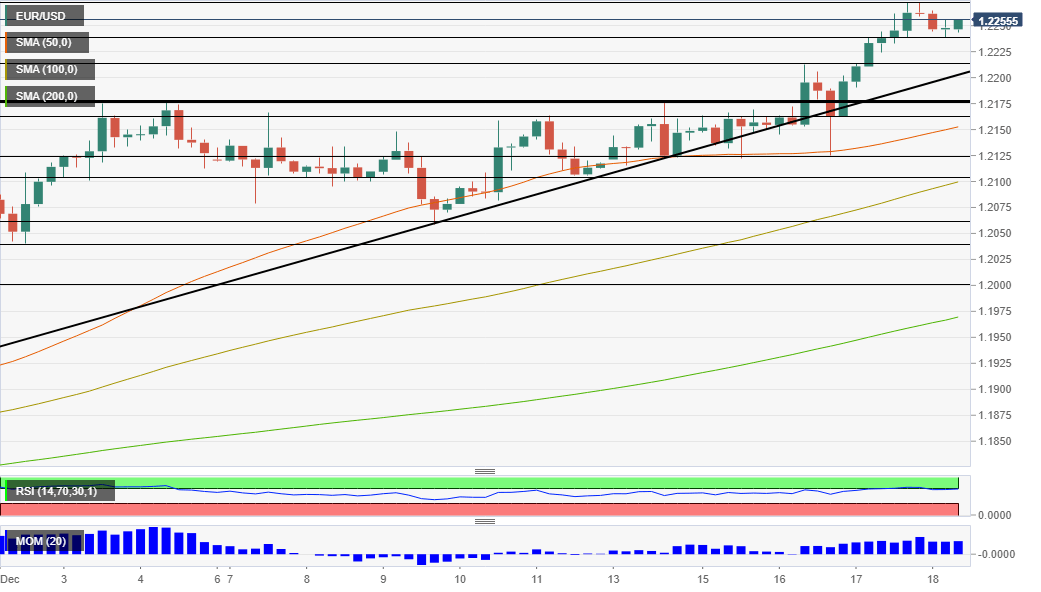 The Relative Strength Index is just below 70 – marginally outside overbought conditions. Momentum remains to the upside and the pair is still above the 50, 100 and 200 Simple Moving Averages, yet to resume the uptrend, an extended correction may be needed.

Can dethroned King Dollar make a comeback? Santa’s market gifts are generous but not infinite