EUR/USD: Time to take profits? Three reasons why the euro could fall from here

Will Donald Trump be found guilty or be acquitted? While the political world is focused on the trial in the Senate, markets are not culpable for forgetting about critical US stimulus and selling the dollar. Yet that may change quickly. Pushing speculation of a gargantuan relief bill has been allowing money to flow back to bonds, resulting in lower yields and making the greenback less attractive. EUR/US has benefitted from the decline in returns on US debt and also from the cheerful market mood.

Is it time for a reversal? There are three reasons to suspect a correction is coming.

Jerome Powell, Chairman of the Federal Reserve,. is set to deliver a speech on the labor market later in the day. The latest Nonfarm Payrolls report has shown that job growth is meager and the powerful central banker may use his public appearance to urge lawmakers to act. Investors may respond to such a reminder by selling bonds in expectations of higher debt issuance, boosting the dollar.

Ahead of Powell’s speech, America’s inflation figures for January may edge higher and also build the case for higher bond yields. According to Purchasing Managers’ Indicators, price pressures are mounting. Markets will likely focus on the Core Consumer Price Index rather than the headline figure.

The EU aims to vaccinate 70% of adults through the summer – a goal that looks elusive with every day that passes and immunization figures only slowly climb. Deliveries of doses are scheduled to arrive in the old continent during February, but the quantities are low and distribution sluggish.

European countries are lagging behind the UK and the US: 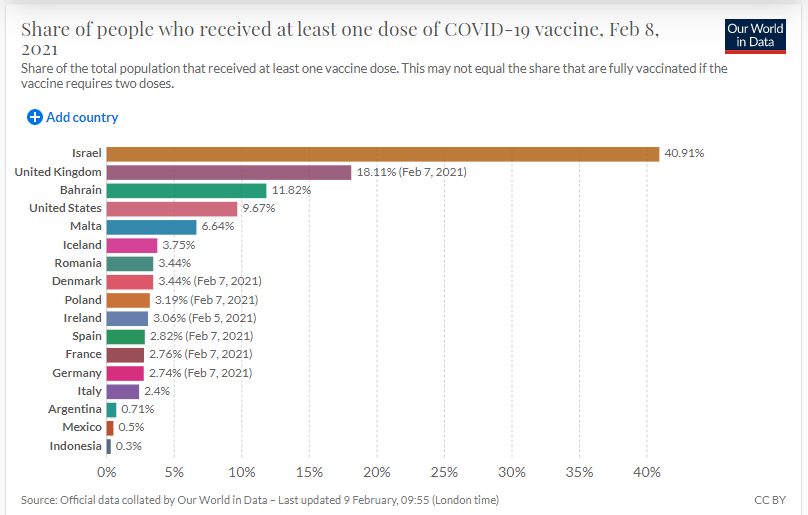 In the meantime, the virus continues taking its health and economic toll/ Germany will likely extend its lockdown well into March, perhaps until the middle of next month, as cases and hospitalizations remain elevated.

The Relative Strength Index is just above 70 – in overbought territory. This development indicates a correction. Moreover, while the currency pair has topped the 50 and 100 Simple Moving Averages, it is capped by the 200 SMA.

Indian engineering exports increase by 18.69 per cent during January 2021

Introducing Project 10 Percent: Building a culture of repeatable innovation at…

Ampleforth Governance Token (FORTH) is launching on Coinbase Pro

Ampleforth Governance Token (FORTH) is now available on Coinbase

Ampleforth Governance Token (FORTH) is launching on Coinbase…

Ampleforth Governance Token (FORTH) is now available on…