King Dollar is back – as bond yields continue rising. Despite Britain’s vaccination campaign, sterling has lost some steam, with the market somewhat fearing tax hikes. US inflation figures are returning to the spotlight exactly as fiscal stimulus is set for a critical vote. In the UK, GDP and the reopening stand out.

This week in GBP/USD: All yield to the dollar

Dollar strength: Higher yields have remained the name of the game in currency markets, with every move in US ten-year yields rocking the greenback. The world’s reserve currency advanced each time the global benchmark jumped above 1.5% and retreated when it hovered closer to 1.4%. Investors were closely following the Fed, data, and stimulus developments.

Jerome Powell, Chair of the Federal Reserve, refused to commit to curbing the rise in returns, only saying that the speed of the rise “caught my attention.” However, the bank continues seeing this increase as a sign of better growth prospects and said it is eyeing several measures of financial conditions. His reluctance to act sent yields and the dollar surging, knocking GBP/USD well below 1.40.

Where is the US economy heading? The week began with an upbeat note from the ISM Manufacturing Purchasing Managers’ Index, which pointed to red-hot activity and especially inflation. However, ADP’s jobs figures and ISM’s Services PMI already missed estimates, causing concerns on employment.

February’s Nonfarm Payrolls reports showed an increase of 379,000, more than double than expected and on top of upward revisions. The dollar reacted by extending its gains.

Stimulus: President Joe Biden ceded ground to moderates in his Democratic Party and agreed to limit the scope of the $1,400 stimulus checks. Markets had already priced some kind of compromise and raising the chances that the bill would pass added to increasing growth prospects. It also boosted yields and the dollar.

Vaccine: The US began inoculating citizens with the Johnson & Johnson jab, the third weapon to be deployed against COVID-19. While both America and Britain immunize at a rapid rate, cases have halted their sharp declines on both sides of the pond.

Covid infections in the US, the EU and the UK 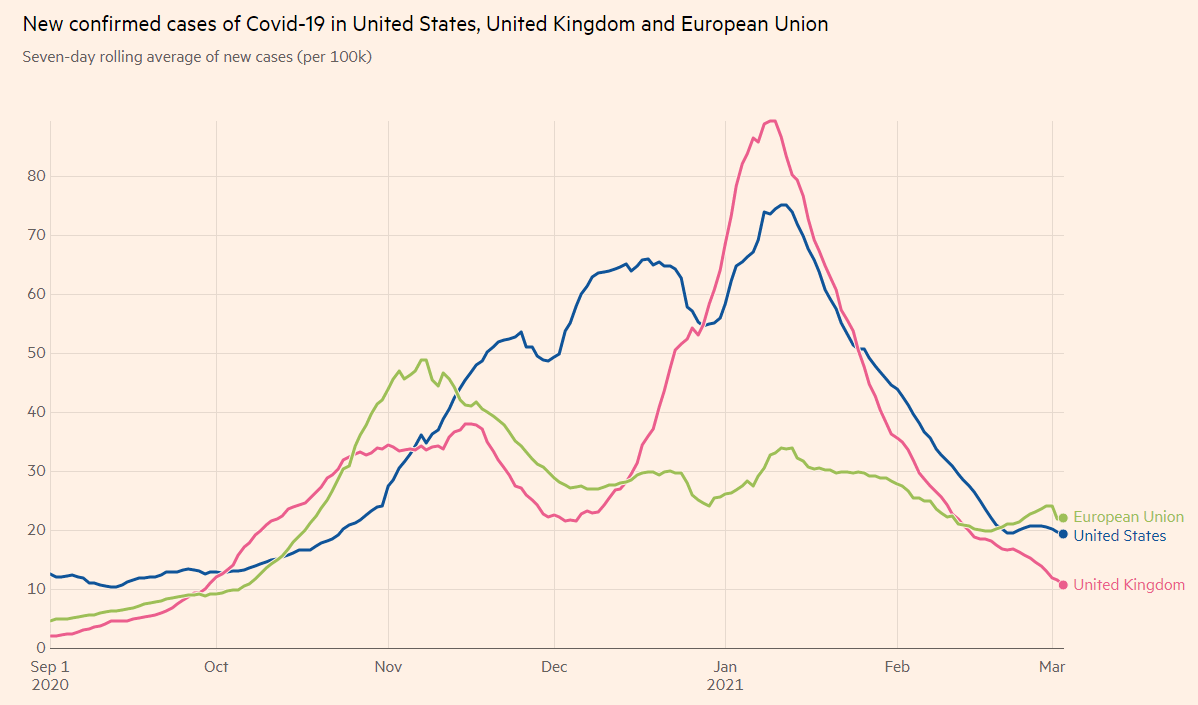 UK budget: Chancellor of the Exchequer Rishi Sunak succeeded in presenting a corporate tax hike without sinking sterling – the result of introducing goodies and raising forecasts. Perhaps the most appealing part was incentives for investors, dubbed “super deductions.”

Markit´s final UK PMIs were mixed, with manufacturing bumped up to 55.1, but services downgraded to 49.5 points.

Is Britain’s vaccination campaign running at full speed? After hitting the 15 million people mark on February 15, there seems to be some slacking off in recent weeks. The pace of immunization is critical as the UK enters its first stage of reopening on March 8. A successful return to normal would boost sterling while bumps in the road would weigh on it. 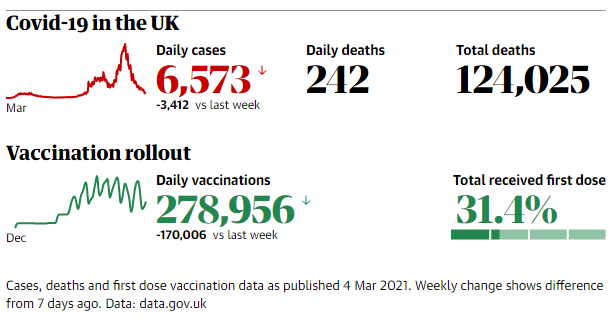 Bank of England Governor Andrew Bailey is set to speak early in the week, in his last appearance before the next rate decision the following week. Similar to Powell, he is set to shape expectations and perhaps comment on rising bond yields. For the UK, it may be less of an issue – the government seems to pay heed to rebalance the budget, at least more than in the US.

The second significant event on the calendar is the release of Gross Domestic Product figures for January. Did the economy keep calm and carry on into 2021? Despite lockdowns, Britain’s economy edged higher at the end of 2020 but there are doubts about further expansion in January, during which the nation was in lockdown.

Here is the list of UK events from the FXStreet calendar:

3.14 – Pi Day for some – is the date on which several existing government programs expire, seen as the deadline for passing the covid relief bill. House Democrats passed the original $1.9 trillion worth of aid, but that will return to the lower chamber, at least due to stripping out the minimum wage hike. What will the final scope of stimulus be?

Investors are pricing anything from $1 to $1.5 trillion, so a package in the hundreds of billions would be disappointing, while anything closer to the original sum would boost markets. Comments from Joe Manchin and Kirsten Sinema, the most conservative Democrats in the Senate, are critical to any approval. Republicans are set to unite against it. Given the 50:50 Senate split, the president’s party has no margin for error.

Biden set a low bar of inoculating 100 million Americans in his first 100 days, and he is nearing that goal. After the bump caused by the “deep freeze” storm, over two million Americans receive a jab every day. An additional acceleration would be cheered by markets. 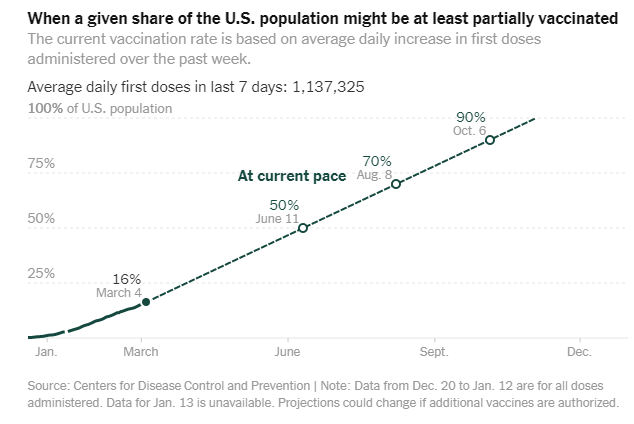 Are consumer prices rising? Inflation remained tame in January, but producer prices picked up. Economists expect the headline Consumer Price Index to advance to 1.6% in February, but see Core CPI depressed at 1.4%. Any sign of rising prices could boost the dollar.

Weekly jobless claims on Thursday are of interest after the Nonfarm Payrolls, but investors are less sensitive to jitters that were seen in recent weeks. The University of Michigan’s preliminary Consumer Sentiment Index for March is set to remain below 80, despite existing stimulus and the vaccine rollout.

Here the upcoming top US events this week:

Pound/dollar continues benefiting from upside momentum on the daily chart and trades well above the 50-day, 100-day and 200-day Simple Moving Averages. These bullish signs come despite the recent setback, which included a failed attempt to break above the uptrend resistance line in late February. Powell’s refusal to act may continue echoing in financial markets for another week, strengthening the dollar and outweighing any other forces. GBP/USD has room to extend its fall.

The FXStreet Forecast Poll is showing that experts see the current decline as one that may have gone too far – and expect a gradual increase from here. While the short-term outlook has been marginally downgraded, the medium and long-term ones remain virtually unchanged since last week. Entire fiscal stimulus to be funded by borrowing, revenues; not taking money from people: FM