GBP/USD Jumps on Talk of a Brexit Deal Emerging

**UPDATE**: Sky News have reported that the deal is done, according to a No 10 source. However, Sky News did note that some sources a far more cautious with talks still ongoing. (Tweet Link). That said, there is a growing sense that while talks are in the end phase, a deal is yet to be officially confirmed, however, expectations are for a deal to be announced later today.

Brexit Latest: The Pound has been given an added lift amid reports from EU sources that members states have started to prepare for a provisional application for a trade deal as of January 1st, while members states have also bee told by the EC to be ready for a meeting on Thursday morning “IF” a deal is finalised today. Alongside this, an EU diplomat noted that it seems the deal is pretty much there, it is just a matter of announcing today or tomorrow. In turn, GBP/USD has picked up from the 1.34 handle, rising to fresh session highs of 1.3480.

What Next?: Looking ahead, the focus will be on comments from officials confirming the recent reports for GBP to extend higher. Keep in mind that PM Johnson and EU’s Von Der Leyen is expected to hold another call today or tomorrow in an attempt to find a compromise over fisheries and level playing field. 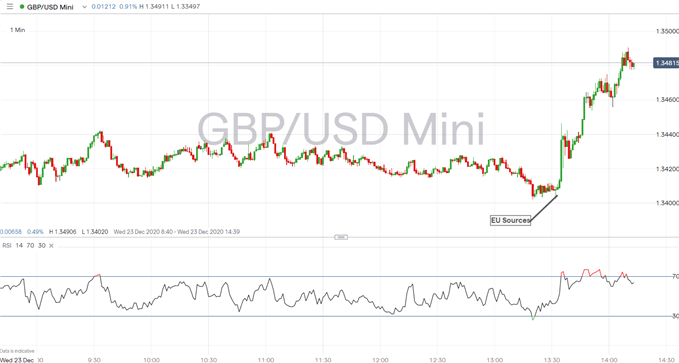