Get Your Free Equities Forecast

The IBEX 35 has had a solid run in the last few weeks but again it seems unable to break the 61.8% Fibonacci (8,450), which has been the highest level for just under a year now, before the meltdown started back in March 2020. I’ve emphasized many times how important Fibonacci levels are to measure an index’s recovery, and this is proving to be the case with the Spanish index.

The typical positive start to a new month hasn’t lasted long and most indices are trading in the red this morning, despite a relative calmness in bond markets providing some relief to investors. The latest round of economic data also hasn’t been helping, with weak manufacturing and construction data coming out of Asia, followed this morning by worse than expected retail sales in Germany, which have fallen 4.5% in the month of January, much worse than the -0.3% expected despite continued lockdown measures in the country.

In Spain, the strongest gains for the past few days have been seen in the tourism and banking industries, with IAG (+13.6%), Melia Hotels (+5.3%), and Banco Sabadell (+5.23%) leading the gains as forecasts for the summer season improve with the continued rollout of vaccination programs worldwide.

The health situation has improved significantly in the past few weeks in Spain, with average active cases per 100,000 falling below 200 for the first time since last summer, showing a move in the right direction. There are still some hotspots and most of the states in the country remain under social distancing rules but the local government is optimistic about the prospects of reactivating international tourism this summer, something that the EU has been lobbying lately with increased talk about a vaccine passport. 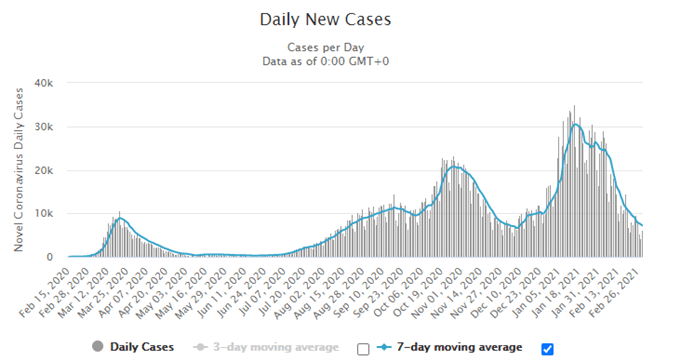 Technically, the IBEX 35 is holding pretty strong compared to some of its peers, so I don’t really expect a strong correction in the near-term. This difference is partly due to Spanish stocks catching up as they lacked any upside up until the vaccine news come out in November. Since then, the IBEX 35 has been outperforming other major European indices and has been able to avoid any major pullbacks aside from the correction at the end of January.

With this in mind and a return of optimism with the possibility of reactivating tourism this summer, I think the Spanish index is still in a pretty strong position to attempt further upside. Strong support is likely to remain at the ascending trendline since the Jan 31st lows, converging with the 20 and 50-day SMAs at 8,175, whilst bullish momentum will need to be able to break above the 61.8% Fibonacci (8,450) in order to fully close the gap caused by the market meltdown in March 2020.