No industry wants to recognize its own decline, particularly one that contains some public companies. When an industry goes south it typically triggers denial and public pronouncements to the contrary. The industry puffs itself up to look bigger. We see that happening now with the multi-level marketing (MLM) industry in the United States.

First, a caveat. The data below comes from the Direct Selling Association (DSA) and, as always, remains unverifiable. Assuming that whatever bias or inaccuracy may exist in the data is consistent over time, we can still get an idea and the trend is not pretty.

The puffed-up part begins in 2018 and 2019. According to the DSA, the number of MLM industry participants went from 18.6M in 2017 to 36.6M in 2019. Wow! How did that happen? How did the industry go from 18.6M “representatives” to 26.2M “Preferred Customers” and 10.4M “Discount Buyers”? As all industry participants were in a single number prior to 2018, perhaps some portion of the 18.6M in 2017 was not actually sellers but only buyers. If so, then what are we to think about the 6.3M “Direct Sellers” in 2019? Is the number of actual sellers increasing or decreasing relative to 2017? And where do the numbers for the Preferred Customers and non-selling Discount Buyers come from since Herbalife (NYSE:HLF) is the only MLM company required to make this type of distinction, per the FTC Settlement? And most importantly, why do we not see a corresponding increase in retail sales reported by the DSA?

While these are fun questions to ask, like a parlor game, the data over time tells a more dire story. We begin to get a hint of trouble by looking at the reported growth of direct sellers from 2010 to 2017. Though growing, the increases average only about 2% annually, not quite keeping up with the 2.8% annual increase in the U.S. gross domestic product (GDP). Even with one year better than the other, the industry was losing in terms of the number of sellers and growth in the GDP. This becomes more clear as we look at what the DSA calls “Retail Sales.” 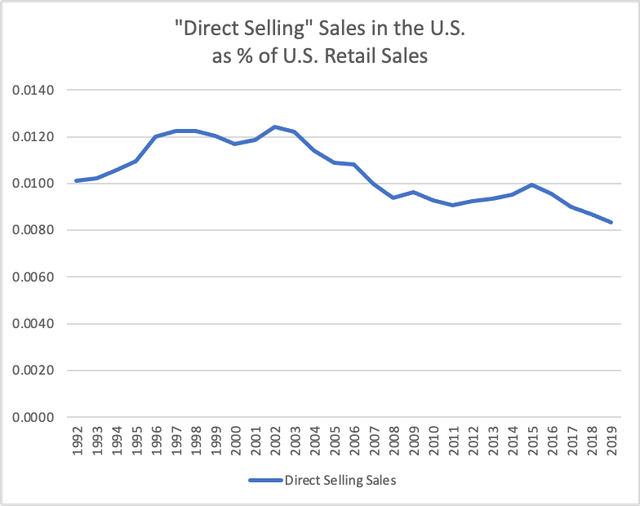 So, what does it all mean? No doubt the DSA runs around Washington D.C. telling anyone who will listen, particularly those in their congressional caucus, that this is a very important industry. No doubt those 6.3M sellers in the U.S. are running around highlighting the MLM “business opportunity.” And, no doubt, for now investors in public MLMs will shrug their shoulders, at least until margins start also going south.

Whether admitting the decline or not, the DSA data show an industry at a low mark since at least 1992. Should the opportunity present itself, regulators may want to consider both the viability of the MLM model and more importantly, how it gets marketed by MLM companies and their selling agents. Perhaps even those outside the U.S. will be interested in this part of the story.

Disclosure: I/we have no positions in any stocks mentioned, and no plans to initiate any positions within the next 72 hours. I wrote this article myself, and it expresses my own opinions. I am not receiving compensation for it. I have no business relationship with any company whose stock is mentioned in this article.